JB’s “last” HK luncheon , probably not , he will be back but in the meantime we will miss him and needed to celebrate properly (Posted on 4 December 2014) 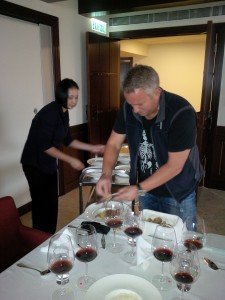 Never has a kilo of white truffle been so generously shared between so few at lunch .

As you can see we started off with Cristal 2002 and Krug GC en magnum with some cheese & nibbles to settle us into the swing whilst we discussed the order in which wines should be tasted . 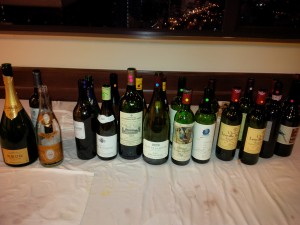 The marvellous Ramonet Batard Montrachet 1999 & 2001 caused quite a stir relegating Leflaive to second place amongst the whites .

With JB’s cooking skills on display Porterhouse burgers kept us going as we headed into the reds .

A magnum of Dujac Clos de la Roche 2000 was sublime and disappeared rather quickly .

Caymus & Opus One 2005 were reliable but up against stiff competition whilst the Sine Qua Non “Turn the whole thing” 09 should in hindsight have been saved ‘til last .

The Leoville Poyferre 1990 showed extremely well though I felt the second bottle was a tad volatile .

Now to the main event , let’s get ready to shave the truffles , JB’s own butter tossed pasta arrived and we were seated for a real treat .

With the truffles having been flown in from Italy the day before we were most impressed to see that very little of the Kilo had gone on JB’s late night Friday pizza so we were all about to be spoilt .

A magnum of La Mission Haut Brion 1986 was on top form , mixed critical reviews online perhaps suggest the importance of correct cellaring and of patience in knowing when to open such bottles .

The Mouton Rothschild 1973 was the happy surprise of the day , just singing , delicious and much fresher than I had expected it to be , the lovely Picasso label seemed well suited to celebrating the year in which Mouton Rothschild finally received its elevation to First Growth by Presidential decree no less .

A picture tells a thousand words so here you go : 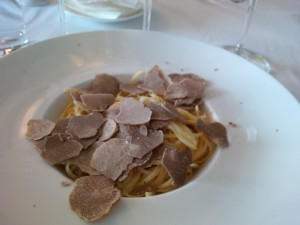 My thanks especially to JB and GW for their generous wine offerings , the truffles and late night hospitality ( my own antics better left unmentioned I believe ) & also to my fellow guests for your own wonderful offerings , wines , cigars and great times .

JB – We’re gonna miss you man but not as much as certain restaurateurs in town whose businesses may be in trouble as a result of your absence , but at least the rest of us will be able to get a booking for lunch …… 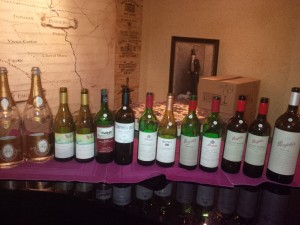 Unable to decide which was the finest Australian red wine , Wickens & Co got together with a dozen friends & clients known to enjoy grand Antipodean juice in order to taste many of the best .

In a bunker at CWC designed to hold munitions and just about strong enough to hold the merriment of last Friday evening we progressed through the finest of Penfold’s , Torbreck , Wynns and others .

A loose theme for the evening was the unleashing of a magnum of the seriously rare Penfolds 60a , 2004 and it withstood everything we could open against it .

Starting with Cristal 2005 en magnum , delicious and decadent , we moved gracefully onto Leeuwin Art Series Chardonnay 2005 which sparked lively discussion based upon how much we all seem to enjoy Margaret River whites , perhaps more so than their reds .

Generally aiming to serve the older wines early in the evening we were all delighted by the Wynn’s John Riddoch Cabernet Sauvignon , Coonawarra , 1982 which was in prime condition and had it been tasted blind might well have been labelled a 1982 Bordeaux with heaps of elegance , no sign of tiring .

Seppelt St Peter’s Shiraz 1998 showed extremely well and was to be a wine that I would return to later in the evening to greatly enjoy , very smooth , super value .

Sneeking in a lovely Grange 1995 the room was warming up .

The middle section of the evening was dedicated to Penfold’s Special bins or at least their Coonawarra Cab / Kalimna Shiraz blends .

1990 Bin 90A , everything in place , probably needed more decanter time
2005 Penfolds “Cellar Reserve” Cabernet/Shiraz South Australia , if I recall correctly this was voted “wine we would like to drink more of now “, along with the Wynn’s 1982 .
Penfold’s 60a 2004 , definitely “wine with most potential” for the evening , buy any you can find !

Moving on we had by now enjoyed delicious food from CWC , well matched to the wines ( unless you chose the fish main which I did and was roundly abused for )

All showed intensity and quality , the Hill of Grace showed in a class of its own for me whilst the Grange 2008 offered more than a peek of where this quite remarkable wine is going , reminiscent of Petrus ’09 , this stunning wine is immediately approachable ( a rare thing for young Grange ) whilst showing at least 50 years of powerful enjoyment ahead of it .

Feeling the need to have a drink by this stage the mouth-watering Fonsecca 1977 flowed and the cigars came out , Grange 1990 and DRC Echezeaux ’04 finished up a memorable evening at the club .

My thanks as always to all those who kindly contributed enough bottles , good company and laughter for an entire month . Bravo !

Browse by the case at

Tell A Friend
Tell a friend
Close
We apologize that the store is being finalised.
Please click here to contact us for information about these Products.